The IPS was founded on 7th January 1947, during the Indian Science Congress meeting held in New Delhi.

The first National Conference of the society was held at Patna in January 1948.

The IPS began in 1947 with 15 founder members and has now grown to a membership of above 7000 specialists. The IPS currently represents the largest society of mental health professionals in India & works on health advocacy, social activism, policy formulation & medical research in the field of mental health.

A Brief History of IPS

The Indian Psychiatric Society, the national organization of psychiatrists in India, was founded on 7th January 1947 during the Indian Science Congress meeting held in New Delhi.

The organization holds its origins in 1929 when Col Berkley Hill founded The Indian Association of Mental Hygiene affiliated to the National Council for Mental Hygiene in Great Britain which ceased to function after a few years. Later the Indian division of the Royal Medico Psychological Association (RMPA) was formed in 1939 at the initiative of Dr. Banarasi Das. Later, The Indian division of RMPA was dissolved after the formation of the Indian Psychiatric Society. Lt Col J E Dhunjibhoy was the first president of the Indian Psychiatric Society who shifted to Pakistan after partition and his place were taken over by Dr. N N De. Major R B Davis was elected as the first Secretary and Treasurer.

The Society held its first Annual General Meeting on 2nd January 1948 during the Annual Conference at Patna under the Presidentship of Dr. N N De. The Society was registered at Patna on 30 December 1948 under the Societies Act XXI of 1860. The Memorandum of Association had ten members. It was decided that the Society would hold its annual meeting in conjunction with the Indian Science Congress. 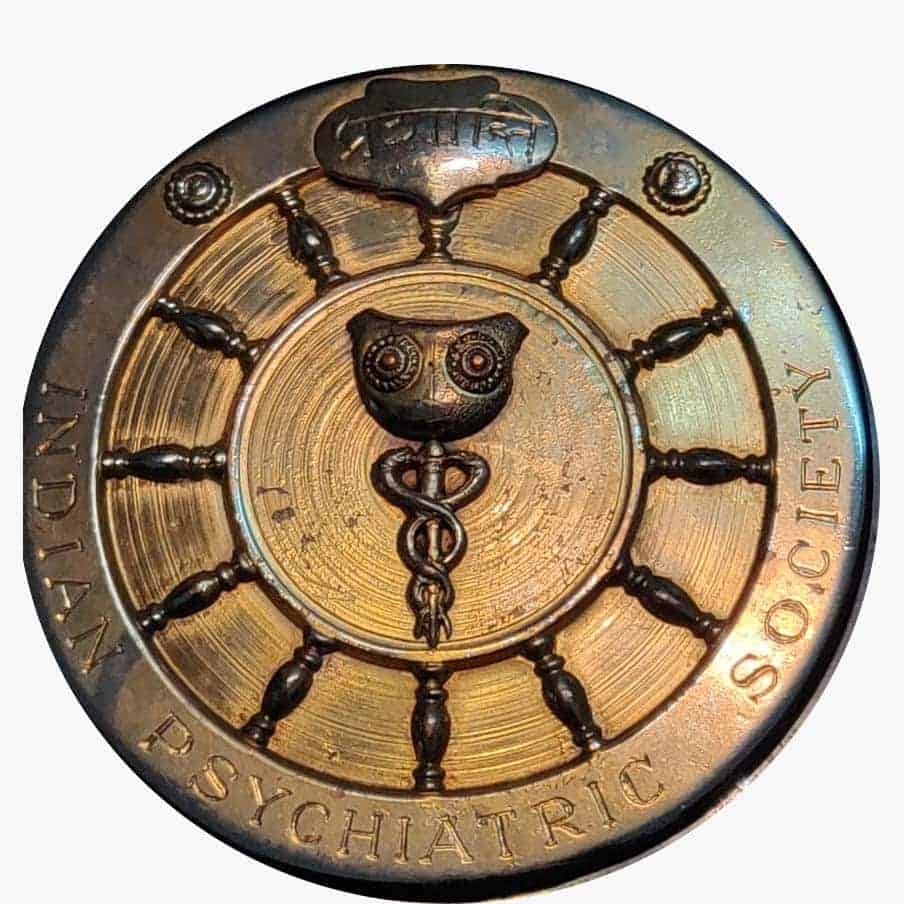 The Emblem of the Office of President was donated by Colonel (later Major General) P N Bardhan in 1960. The circle depicts the mandala – wholeness, the wheel-eternal cycle or eternity, also process. The Urn is the Urn of knowledge, signifying the Yin-Yang principle, the mirror image denoting unity behind all apparent duality. The staff and the entwined snakes are universal medical symbols. Our motto is “Prashanti” meaning Peace and Calmness.

At the Executive Council meeting on 9th September 1948, it was decided to name the official publication as Indian Journal of Neurology and Psychiatry. Dr. N N De was the first editor of the journal. The journal was subsequently named as Indian Journal of Psychiatry in 1958. Since inception the journal has upheld high academic standards, but due to the dearth of studies, lack of manpower and lack of funds, the publication was discontinued the last issue appearing in 1954(Vol. 5 Issue 1). In the annual meeting of 1950, the draft of the Indian Mental Act was finalised.

Since 1948, the annual conferences of the Society are being held regularly every year except in the year 1963 due to the national emergency.

In between 1975 and 1978, five IPS Zones were established and had become active. Consequently, there were amendments in the IPS constitution. Similarly, with the arrival of many Scientific Papers, there were many awards to stimulate both the young and senior members. The early awards were Marfatia and Bhagwat award and Dr.D.L.N. Murty Rao oration in 1978-79 in Poona. Today there are many other awards. Accordingly, an awards committee has been formed.

In flux of time and in transfer of Secretariat from one place to another, the IPS registration certificate was lost. In 2020, through the efforts of the then Hon. Secretary General, Dr Vinay Kumar, the certificate was traced back from the Archieves of the Government of Bihar.

The certificate reveals the the Indian Psychiatric Society was registered the 13th December, 1948 at Patna, making IPS the 4th oldest professional organization of the nation.

The meeting in 1978 at AIIMS was the first World Psychiatric Association Regional Meeting in India inaugurated by the PM of India Shri Morarji Desai. The year 1982 will be remembered for developing a National Mental Health Programme and 1987 where a New Mental Health Act was enacted.

From the humble beginning of 15 members, the Society has grown into one of the biggest psychiatric societies of the world with a membership of more than 7000 members. The society moved to its headquarters in Gurgaon (now Gurugram) in 2012.

The society has shown signs of vitality and stability for the last many years now and holds a promise for an even better future.